To coincide with shark week, Sylvester Stallone’s King Shark gets his own spot from The Suicide Squad, complete with Nom Noms!

If, like me, you are looking forward to the upcoming sequel/reboot ‘The Suicide Squad’, then you will be ready for King Shark to hit the screen. It is bound to be in some gloriously hilarious and gory ways. Hollywood legend Sylvester Stallone voices the CGI character and I can’t think of anyone better to voice him. A brief spot for the character has appeared online. Get out of the water and hide as here he comes:

When you’re King Shark, every week is #SharkWeek… #TheSuicideSquad in theaters and streaming exclusively on @HBOMax August 6. pic.twitter.com/qDncs99JI0

The spot has been launched to coincide with Shark Week on the Discovery channel. It has been perfectly timed too as it will garner interest from non-DC fans with its hilarious and quirky take on the character. He is bound to be a crowd favorite when the film opens on August 6th. But the question is, will he survive to see the end credits? We already know that most of the cast will get killed off during proceedings. Harley Quinn will definitely survive but the rest of the cast is not assured of seeing a further sequel. Only time will tell but I hope that King Shark manages to survive the film and possibly go onto his own solo movie. 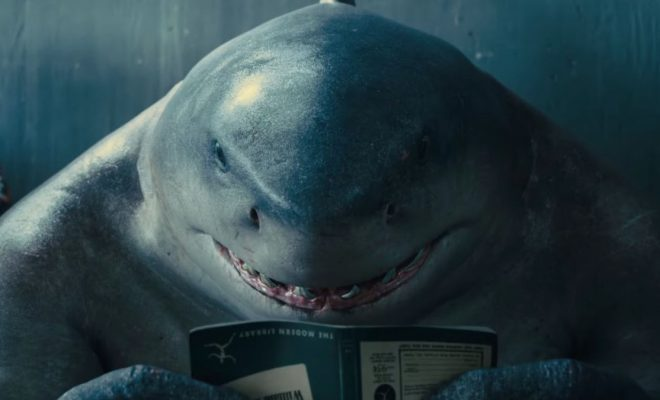 ‘The Suicide Squad’ opens at theatres and on HBO MAX on August 6th.

Will you be watching ‘The Suicide Squad’? Where do you intend to watch it? Will you visit the movie theatre or watch it at home? Why not drop us a line and tell us!